History of the School

Visitors to this page may be interested to know that the School’s Archivist, Ms Angela Platt, has now created a separate site which contains an extensive variety of documents and photographs available for online perusal and reference. Please click on this link to navigate to the site.

During the latter part of the nineteenth century, the educational principles of the German pedagogue Friedrich Frobel were considered radical because of the emphasis he placed on the learning experiences of young children. These experiences, as orchestrated by Froebel and taken up by his followers, were seen as the key to social progress and to the health of society.  The pedagogy impressed the educational benefactor, Mrs Julia Salis Schwabe (1819–1896), and she decided to establish a teacher training college with a Demonstration School in England based on Froebel’s well-documented teaching principles. Claude Montefiore (1858–1938) was the Secretary of the inaugural Froebel Society, which supported the College and the School. They, as joint benefactors, agreed to meet any financial deficits.

In 1896 the College and Demonstration School were opened in Colet Gardens, Kensington by the Empress Frederick (Daughter of Queen Victoria and wife of the Crown Prince of Prussia). The first Headmistress was Esther Lawrence and there were six pupils at the beginning of term.

In 1922, a successful Froebel College moved to Grove House, Roehampton and its headquarters, renamed the Incorporated Froebel Educational Institute (IFEI), were established at Templeton, a Georgian house on Priory Lane.

At the outbreak of World War II the School, now with about fifty pupils, was evacuated from Kensington to Dennison House of Little Gaddesden, Hertfordshire, led by Miss Barbara Priestman as Headmistress. The School, by necessity, was now a boarding school.

In 1945, IFEI purchased Ibstock Place, very close to Templeton, from Major Paget. In 1942 the house had been requisitioned by the Ministry of Supply. The Paget family had evacuated first to Oxfordshire, and subsequently to Ireland. At the end of the war Major Paget decided to continue to live in Ireland rather than return to Roehampton. After alteration, the Demonstration School was re-housed and renamed Ibstock Place, the Froebel School.

On the establishment of the University of London Institute, IFEI became one of the constituent colleges. Eglantyne Mary Jebb, the retiring College Principal in 1955, was succeeded by Molly Brearley who, from 1960, oversaw the requirement that all teachers took a three-year training course.

The School served the neighbourhood as a small boarding school for pupils from 5-12 years until September 1976 when the age range was extended to 16 years and boarding ceased. Pupil numbers grew steadily so that by 1990 there was a School roll of 370 pupils.

Over the following years there was much investment in the School’s buildings (see below) which allowed, in 2005, a Sixth Form to be established. Fully co-educational throughout, in 2021 the roll now numbers some 995 pupils.

The Campus of Ibstock Place School

The ‘Main House’ was built in 1913 by the architect Frank Chesterton with sixteen bedrooms and four reception rooms. Originally named St. Serf’s, the house was owned by the Duchess of Sutherland; she was responsible for adding the Ballroom which accounts for the off-centre Reception Hall. She appointed the house in great style which, indeed, encouraged Major John Paget to purchase the house when it was put on the market in 1925. These archive photographs are from Country Life, 1921. 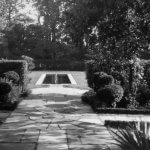 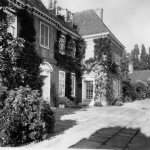 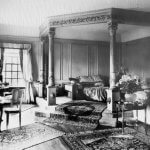 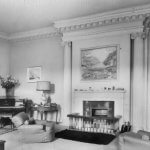 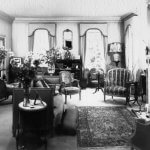 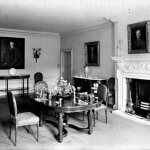 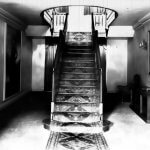 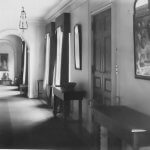 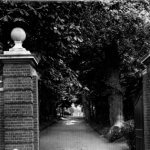 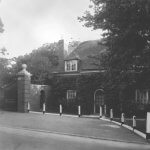 Major Paget renamed the house Ibstock Place after the Leicestershire village which was his ancestral home. The house was characterised by antique furniture, including a Louis XVI suite of Aubusson tapestries and two grand pianos. Major Paget was interested in ‘modern gadgets’ and installed a telephone exchange and a sun-bed parlour. An outdoor swimming pool was built at the end of the formal garden. It was one of the first private outdoor swimming pools in Britain and its present position remains similar to then. Sadly, without the knowledge of the benefit of chlorine, the pool quickly became algaed and was not used. The house was run with the help of a staff of thirteen, as well as a night watchman and a gardener who lived in the Lodge on the corner of Clarence and Priory Lane. The Pagets entertained lavishly and Major Paget’s party trick was to tell the fortunes of his guests; his daughter Winifred recounts in the early 1930s how he read the palm of Mrs Wallis Simpson, then a guest, prophesying that she would be ‘Queen of England in all but name.’ Aged nineteen, Winifred had been presented to Queen Mary after her debutante year in which she held her own ball at Ibstock Place. Later her wedding reception took place in the house and photographs of the wedding party appeared in the Court Circular of The Times.

On Major Paget selling the house in 1945 to the Froebel Educational Institute, it was in disarray.  The air raid shelters and huts in the grounds and on the terrace were converted into a school dining room and classrooms with a Scouts’ group hiring one disused air raid shelter.

From 1978-1991 the School Library had been in makeshift accommodation dating from the war-time occupation on the Terrace, so the move into a mezzanine conversion of the original ballroom of the house designed by Barnsley, Hewitt and Mallinson Architects was welcomed. Its original premises became the Prep School Art Room, until 1996 when this was demolished, together with the accommodation, also from the war, at the end of the Orchard which housed Senior Art. Senior Art moved to the demountables at the end of the Orchard, renamed ‘The Burrows’, which had temporarily housed the expanded Kindergarten, awaiting the completion of Roberts House. The rebuilt Priestman House was opened in 1986, and a subsequent building in 1997, Roberts House, designed by Simpson Grey, allowed for two-form entry through the Kindergarten and Prep School. Roberts Hall, a performance space, was integral to the design and opened by Miss Sheila Roberts.

During 1988, Macleod House, the Prep School, was partially housed in a four-roomed demountable opened by Miss Sheila Macleod; the remaining classes were held in the Lodge and three large classrooms in Main House. The original open-air swimming pool was enclosed during this year; it has been restored and refurbished many times since.

The Froebel Science and Technology Building, designed to offer a Design and Technology workshop, two Science laboratories and a computer room, was opened by HRH Princess Alexandra in October 1992. It was positioned at the end of the Long Corridor. Plans were substantially trimmed to meet the budget and it has subsequently been redesigned and the space now offers five classrooms which have been merged with New School.

In 1989 Godolphin and Latymer School donated a demountable for the Senior School’s Humanities subjects and this was positioned at the end of the playing fields adjacent to the Froebel College site. With the support of the PTA, the Pavilion was converted to house the Mathematics Department and in order to ensure the safe passage of pupils over Clarence Lane, a footbridge was built, which was financed by IFEI. In 1998 the adjacent disused greenhouses were demolished to make way for an all-weather sports court adjacent to the Pavilion.

In September 2000, the School roll stood at 603 and the much needed Dining Room extension was completed and renamed The Conservatory having been designed by Simpson Grey. A two storied building fitted neatly on to the footprint of the Macleod House demountable and in 2003, for the first time, the Prep School children were taught in the same building. The new Macleod House, the Prep School, also designed by Simpson Grey, was officially opened by Mr Tony Salem, Chairman of Governors.

With the opening of Macleod House and the vacating of classrooms in the Porter’s Lodge and Main House by the Prep School, the Art Department was able to move from “The Burrows Demountables” to Lawrence House. As “The Burrows Demountables” had been temporary accommodation requiring annual planning consent despite their longevity, they was demolished and a recreational area created for pupils’ sport and leisure.

The architects Barnsley Hewitt and Mallinson were appointed in 2005 for a ten-year School Development Plan which included a Sports Hall, New School and a Performing Arts Centre. The first stage of the project was successfully completed in 2008 with a full size Sports Hall and Spectator Gallery adjacent to the playing fields. The Sports Hall was opened by Mr Michael Gibbins, Chairman of Governors, who thanked the parents who had given so generously to the Building Appeal, and to the PTA for its donation towards the cost of the Spectator Gallery.

With the Sports Hall in place, the half size gymnasium and the Long Corridor could be demolished to make way for the construction of New School. During the Autumn Term 2010, the New School Science Laboratories and the facilities for Modern Languages were functioning and in February 2011, the English, Humanities, and Mathematics faculties were ready for occupation by the Senior School pupils. The Library, with its specially commissioned shelving, was opened by the Chairman of Governors, Mr Michael Gibbins LVO, on 22 November 2011 who thanked the School’s benefactors.

Retford Nursery which had been opened by IFEI in September 2000 closed in 2008 to become, fleetingly, the Bursary which, given the increase in School numbers, had outgrown its office adjacent to Macleod House. A Dance Studio was created adjacent to Macleod House and the Design and Technology Department took over what had been the workshops of Grove House (Froebel College), so the working character was returned to the buildings.  The purchase of 138 Priory Lane allowed for the establishment of the Bursary offices and a staff flat.

Coopers Cottage had been retained as a hostel for university students until 2004 when it became staff accommodation. In 2015 this accommodation was converted to provide four additional Sixth Form rooms and staff studies. Ibstock Place School now has a defined curtilage on the Lawrence House site.

The School’s new Theatre, designed by BHM and built between the Prep and Pre-Prep School, opened in December 2015 equipped to exacting professional levels in all aspects of its technical operation. From an aesthetic perspective, the building has been integrated into its surroundings through judiciously chosen landscaping and planting to establish a striking visual complement with the closely neighbouring Clarence and Priory wings of New School. The Theatre has a maximum seating capacity of 300, a sizeable proportion of which is arranged within retractable seating banks that fold neatly out of sight beneath a balcony. The complex also incorporates a Drama Studio, Green Room, Control Room and Dressing Rooms. Foyer areas include a bar for the serving of refreshments while a Technical Workshop area behind the scenes is used for scenery construction, prop making and laundering.

The PTA has been most generous in its support of the Theatre and it and many parents have provided a proportion of the cost of the seating bank. 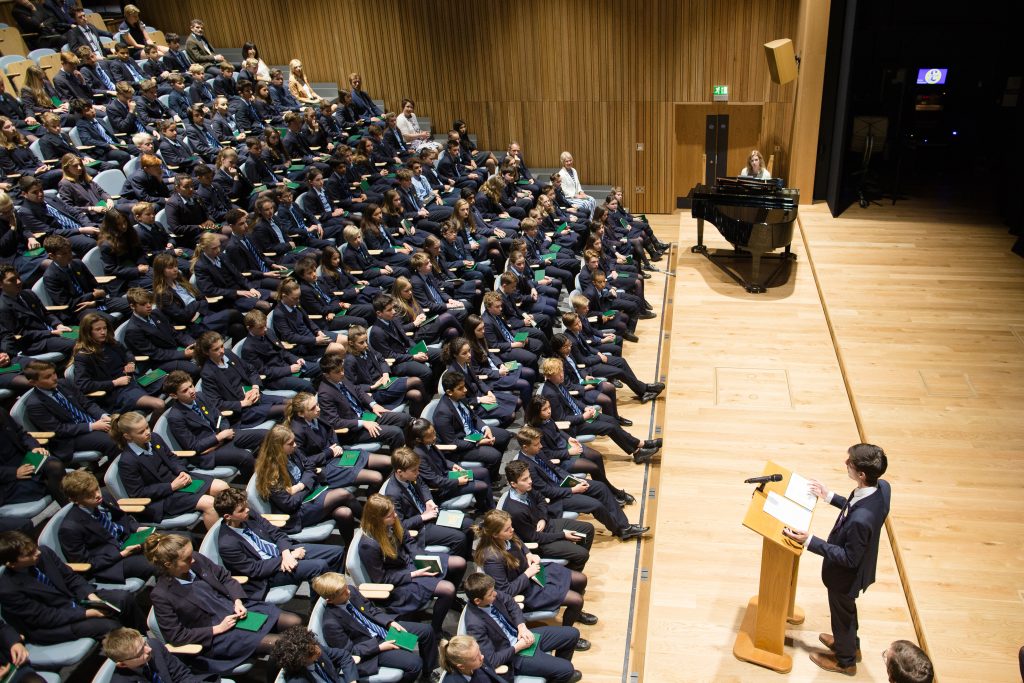 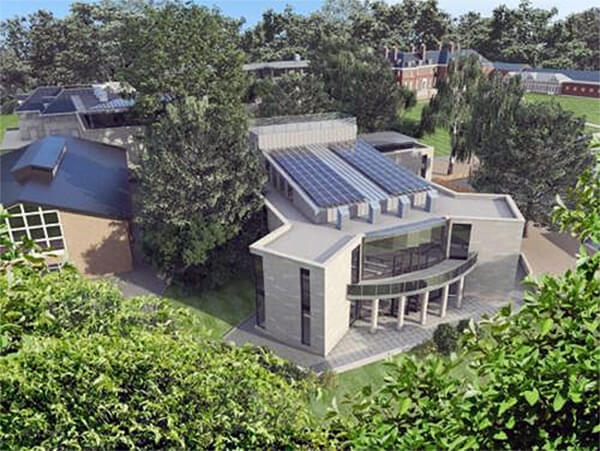 A new Refectory opened in January 2020. Designed by Maccreanor Lavington, it contains outstanding kitchen facilities along with a Great Hall, a Small Hall, a mezzanine level for Sixth Form, and a Sixth Form Study Centre. 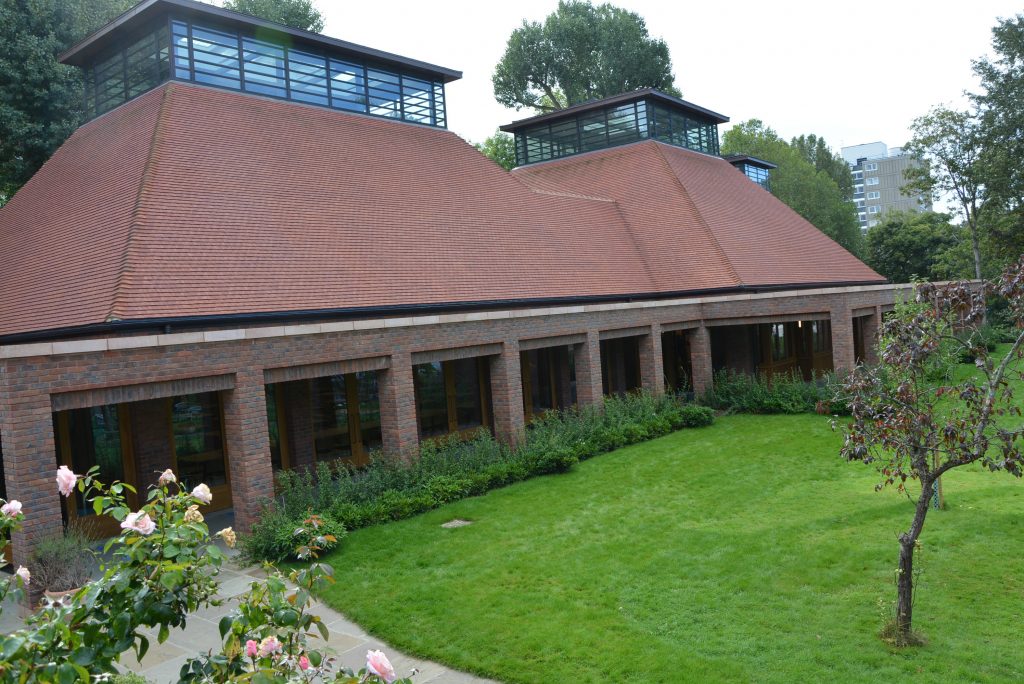