Trips and educational visits to destinations both close to home and around the globe form an invaluable supplement to learning for pupils at IPS.

A recent visit to The Azores, organised by the Geography Department, is described below.

We touched down early in the sunny capital of Ponta Delgada. From the airport we made our way through the narrow streets of the city’s charming old town to the beautiful botanical gardens. We headed for the lava caves just to the north of the city and here descended into the relative cool of the awesome basaltic lava tubes made from the injection of super-heated molten rock into the existing geology.  After checking in at the hotel we toured the city by foot, stopping in at the gloriously decorated St Sebastian’s Church, and the bustling Grace Market where the ice cream on offer was too tempting to resist. 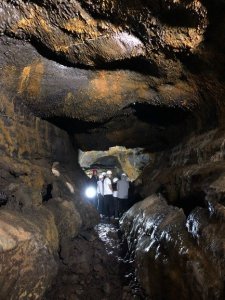 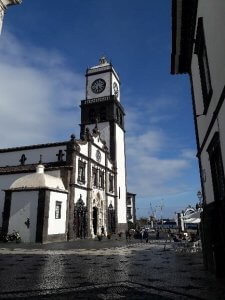 A morning visit to the Gorreana Tea plantation proved fascinating. On entering the building we were met by the fresh and delicious scent of tea processing. The plantation has used the same machinery since 1883 to sort, roll and bake the leaves before packaging and export. Following a quick tour and a few refreshing cups of tea for the road, we headed for the volcanic region of Furnas to explore a moonscape of bubbling geysers and hot springs. The local custom here is to cook large pots of vegetables and meats underground, using the geothermally heated volcanic soils to create the popular Cozido stew. At lunch we found the meat to be deliciously tender, but the structural integrity of the vegetables had been somewhat compromised… The afternoon was spent swimming in the warm and mineral-rich waters of the geothermal lake found in the Terra Nostra botanical gardens. Most invigorating! 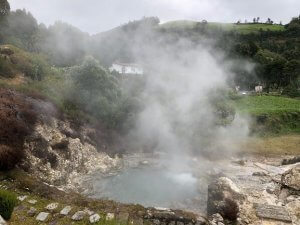 A morning spent on a slightly rough Atlantic was well worth it. We were treated to pods of dolphins playfully leaping above the waves, as well as the majesty of a large whales surfacing for air. In the afternoon we left Ponta Delgada and headed for Lagoa do Fogo, the jewel in the crown of Sao Miguel’s many volcanic craters. But, alas, thick fog had consumed the summit. Undeterred, we set off for the hot springs of Caldeira Velha, cheered on by a medley of popular hits from the late 1990s. Here, some of us enjoyed sampling the hot sulphurous spring water… other were less keen. The afternoon was spent hiking through a tropical-like valley, where steam from hidden geothermal springs rose up through the thick green foliage and hung in the air. At one idyllic location we stopped and bathed in the hot natural spring water just as the heavens opened and a deluge of rain fell. A magical experience. 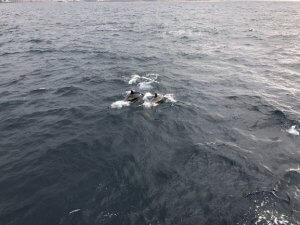 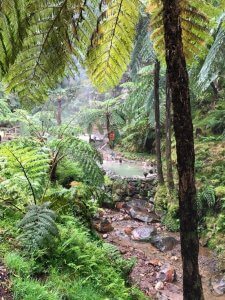 We spent the morning by the Atlantic, clambering over the jagged terrain of ancient lava flows whilst the waves came crashing in around us. As the ocean was too rough for swimming we held an impromptu IPS pool party instead; our pool was geothermally heated, of course. In the afternoon we got on our bikes and went off road. Cycling around the stunning Sete Citades lakes was, for many, the highlight of the trip so far. After an afternoon hike to the top of the precipitous crater edge, we headed back to Ponta Delgada, stopping off at the Black Beach for a photo or two. 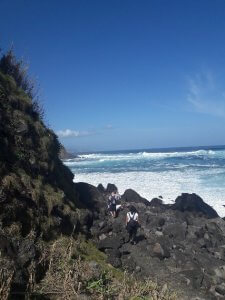 A morning tour of the island’s largest geothermal power station gave us insights into how those who live in the Azores benefit from a potentially limitless energy source. We were also able to visit the nearby Lagoa do Fogo once again, but this time the clouds broke so we were treated to a glimpse of the spectacular view below. This was meant to mark the end of a superb trip, however… dense fog at the airport meant that our flight home was cancelled! We decamped to Hotel Azoris and whiled away the time pleasantly with a visit into town. The following day we had to remain in Ponta Delgada close to the airport, so we had to occupy ourselves with games of cards, reading, football, and lounging by the pool at the hotel. So not totally awful… 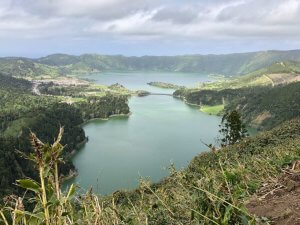 Day 7 Coastal Hike and Paddling on the Beach

With our flight rescheduled for the following day we could once again relax and get back into the swing of life in the Azores. We spent the morning hiking along the spectacular coastline in the most glorious weather. At one point we stopped to paddle in a secluded cove tucked away on the far side of the island. The deep blue of the sky and ocean were indistinguishable, the sun was high in the sky, and a cool breeze blew in from off the Atlantic. As the waves came sloshing in the hustle and bustle of London life seemed very far away, but we ready for home. 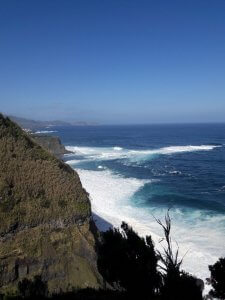